Ugh, the mud we’re dealing with! We’re trying to keep our herd out of the mud as much as possible, but coming off the heels of yet another drought followed by record rainfall, it’s a tough endeavor. And unfortunately Mother Nature’s holding the cards,  all we can do is try to level the playing field.

So we’re moving the cattle often. We’re bringing the herd into a ‘sacrifice pasture’ where we’ve loaded hay into hay rings. Although the cattle congregate around those hay rings and make a muddy mess, we’re sacrificing the health of the grass in this one paddock to try to salvage the other pastures and keep them productive. 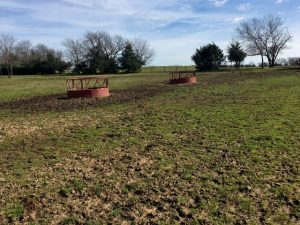 After a few days we’ll move the herd to a nearby hayfield to graze a bit. They can only stay there a short time because although the grass is finally trying to sprout, there’s not much up yet. But it gives them a chance to get out of the mud for a while. It also helps the ground around the hay rings to (hopefully) dry up a bit.

The cows very much enjoy their short grazing time before we once again bring them into the sacrifice pasture for hay for a few days.

I think I join all cattlemen across the nation when I say: